Many of you know about LEGO's Cuusoo web-site.  On one level, it's a neat way of crowd-sourcing product ideas; separating out the "wants" from a few individuals, from ideas that are potentially in demand. The down-side to it: people's taste are fickle and most of the current ideas proposed are more licensed products (not very many original ideas).  But there have been projects that I do support, for instance the Palette Buckets (a similar idea I had many years ago when I was looking to build larger castle structures), the Buket 'o Plate idea (because honestly who has enough plates?), and LEGO Phineas and Ferb ('cause I like the show).

The Minecraft Cuusoo project reaching it's goal of 10K supporters, really didn't surprise me; I've been playing the game and following it on reddit for some time.  I see how much of a fan following it has, and one word from Notch can make/break a web-site; so by Notch tweeting the project, I knew there would be no problems hitting that goal.  I was a little surprised by the Shaun of the Dead project; other than Simon Pegg mentioning it on Conan, I didn't realize it had a cult following that big.  :)  Don't get me wrong, I like Simon Pegg and Nick Frost films and TV shows, but wow... that's amazing! 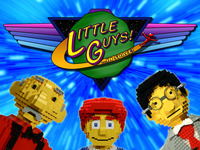 On another topic, our LUG had been approached about doing a large scale model; turns out that finding funding to start building the model has been difficult to secure.  One of the ideas I had back in October was to find funding via Kickstarter -- I hope to post more details later if we decide to take this route.  But in general, I think this is a great venue for raising money to help fund future LEGO projects -- in theory, I'd hope they be charitable in nature, but I can see helping out the occasional 'starving artist'.  But I can also see it help fund art projects that a small group of people couldn't accomplish alone... assuming other people believe in the idea and pledge their support.

If you haven't seen this yet, please check out David Pagano's Kickstarter project, “Little Guys… In Space!”