What 3 LEGO Projects Do You Find Innovative? (Part 3 of 3) 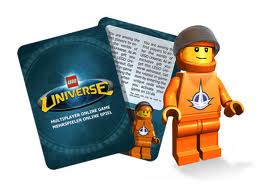 So I'm not going to harp on this one.  I was a beta tester for LEGO Universe, and honestly, I really enjoyed it.  I think in the few months I played, there wasn't too many bugs or problems with it; but I also felt that it was never fully integrated into the on-line LEGO family... which could have been said about the product in general.  This one, I think LEGO realized it too late that the project was slowly bleeding the company dry and about the time the leak was looked at, it was too late to salvage house; which is shameful.

I think the game was ahead of it time, never marketed to the right audience, and it was innovate in it's own right -- in the broad sense, it's just like any other MMORPG with achievements, quests, bag space limitations, game economy/commerce, etc., but it had a building aspect, great artwork, and so much potential for product tie-ins.

For years, I've felt like LEGO themes that lacked a Hollywood license also lacked a good back story.  I've grown up on comic books and graphic novel style of story telling, and the one thing that turns a average good story into a great story is the invention of deeper back story and connective multiverse around it... they layers of narrative.  LEGO Universe could have done this for their NinjaGo, Atlantis, etc. themes.  Tightly layering the story lines between box art, in box comics, the LEGO magazine, commercials, short cartoons, and finally their character's further adventures in LEGO Universe...